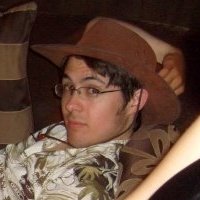 Sometimes, players get what they deserve
2010-02-14 16:48:31
rating 3.7
2014-02-09 20:24:50
14 votes, rating 5.8
Three hours after the game, the vast stadium was empty. The cries of drunk fans ebbing, the night pierced by the sound of bouncers cracking skulls and breaking up brawls. Nobody noticed the dark cloaked figure sneaking across the rooftops, occasionally silhouetted by the faint green glow from the stadium lanterns.

Sorzek chittered to himself as he threw his grapnel across, allowing it to catch on one of the supporting pillars. Sliding down the rope, a quick flash of black powder blew the lock off the side door. His footsteps echoed against the marble floor as he scampered down the darkened corridors. Leaping through the empty seating, he stumbled on an abandoned beer stein, almost falling into the player tunnel.

Steadying himself against a wall, he slowly crept towards the light coming from the locker rooms. To his trained eyes, the green glass over the lanterns outside wasn’t in the least convincing. This however, this was what he here for. He could almost taste the tingle of warpstone on the air, eldritch glow drawing him closer. Shaking slightly with excitement, a lockpick slipped from his fingers, the sound deafening in the silent amphitheatre. He froze against the wall, thoughts of riches banished from his mind.

A long minute later, Sorzek unglued himself from the wall, quietly pushing the door open. Chattering excitedly under his breath, he leapt towards the glowing masks, mounted on busts of pure warpstone. It came as a complete surprise to him when a scaled arm from behind crushed him into the cold marble floor.

Picking the body up by the heels the Lantern dragged it out of the door and slumped it against a wall. His body jerked as he removed the mask, the energy draining from his limbs. Clicking it into place on the bust, he slowly stood back to let the warpstone sarcophagus open. Entering, he closed the door, wincing at the bite of the tiny green needles on the inside. Closing his eyes, the Jade Lantern remembered.

They were an amateur team when they found it. There was a local legend about the abandoned pitch, deep in the jungles of Lustria. One that the weeds and vines could not touch, one that jaguars would steer away from. It was a drunken bet the night before the game, and it seemed like a great adventure. They set out into the jungle full of hope and optimism, hacking down the creepers from the branches to clear themselves a path. To this day, they are convinced that it drew them to it.

He remembered the elation at finding it, finding the perfectly preserved, still inflated ball, kicking it between each other. They heard the masks before they saw them. Their song seemed like a siren in their heads, and they fit as if they had been manufactured specifically for them. The sarcophagi came later, the masks guiding them to charter across the vast ocean, inside the basement of a ruined Tilean tower.

The sarcophagi changed them. They grew bulkier and faster, memories of formations and plays seemingly coming out of nowhere. And still the masks drove them on. It wasn’t long before a Cabalvision agent found them and invited them to play in the notorious Black Box televised matches. Not for the Lanterns the acclaim of the organised exhibition matches, in the Box you take what the network schedules you. Their first game was against a nasty looking team of Chaos worshipping scum. Horned beast-man hybrids standing in front of them, and heavily armoured champions, tall in armour glistening in the blood of a fresh sacrifice.

The game was barely a few minutes old when the Chaos struck. The one that would be known as the Clover Lantern struck at a warrior, who responded with brutal strength, snapping his neck instantly. Furiously, they retaliated, driving into them, forcing them back. The game ended 2-1 to the Lanterns, and their first contract was won. But Clover? They put him back in the sarcophagus and sealed it. It seemed the right thing to do, to be buried in the crypt that brought him here.

Imagine then, the surprise when at the next morning’s training session, the Clover Lantern was standing at the gates. The sarcophagus was with the others and Clover did not remember the game at all. The dark secret of the Lanterns was sealed that day, a pact made for the gold of the Cabalvision networks. Every time a Lantern died, his mask brings him back. Not only that, it brings them back as they were when they discovered the masks, a sickening reminder of the fresh optimism of youth.

The memories take time to return. It can take months to remember their former skills, and the Jade Lantern is no longer sure which memories are his. His childhood, that he thinks he knows, but the pitch memories? A blur of recollections of games, of blood and slaughter. The knowledge of precisely how to stop an opponent, how to ride the tackles and use your weight to smash through them, the moves seem instinctive now.